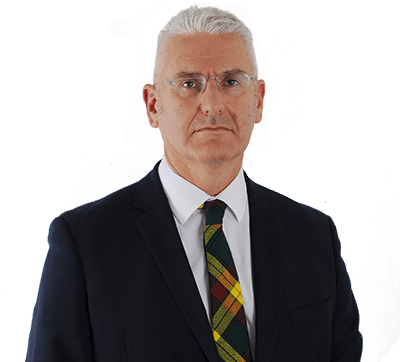 One of the founding partners of Adams Whyte, Nigel has specialised in criminal defence since 1991.

Described by The Legal 500 as “extremely professional”, Nigel is routinely instructed in the most serious and complex of criminal cases and has successfully defended some of Scotland’s most high-profile cases in recent years, recently securing the acquittal of his client in the longest-running fraud trial in British legal history.

It’s a reflection of the high standards of professionalism for which Nigel is widely recognised that he was previously appointed by the Scottish Legal Aid Board to undertake the trusted role of reviewing the performance of fellow criminal defence solicitors across Scotland.

"It’s hard for us to put into words how happy we are that we hired Nigel Bruce. He listened from the first moment, truly cared about justice and he cleared our son’s name. Nigel is a first-class advocate but even better person. As Americans, we know literally thousands of lawyers in the US and we are so thankful we now know one great lawyer in Scotland." Greg and Jennifer, USA

What they say about Adams Whyte

Some cookies are essential, whilst others help us improve your experience by providing insights into how the site is being used. The technology to maintain this privacy management relies on cookie identifiers. Removing or resetting your browser cookies will reset these preferences.